I am Lexie Brennan and am a senior at Monona Grove High School. This fall I am attending Carroll University. I plan to study nursing and specialize in pediatrics. Even though I personally do not know someone with Epilepsy, I found it interesting how this device can change a person's life.

Epilepsy is a condition of the brain causing seizures which affects approximately 65 million people around the world. A seizure is a disruption of the electrical communication between neurons. Treatments for people who suffer from Epilepsy include medications like Carbamazepine, Diazepam, Eslicarbazepine, and Ethosuximide. These types of anticonvulsant medications are expensive and many insurance companies do not cover all the cost. The side effects on these medications depend on how much one is taking, the type of medication, and how long one is taking the treatment. Some common side effects are fatigue, blurred or double vision, and unsteadiness.

The RNS System was created by Neuropace and was approved by the FDA in 2013. This system does not cure epilepsy, but will lower the amount of strokes one will have. Doctors will locate the area where your seizures start and then during the procedure, the leads will be placed at the seizure source and the system will be placed under the scalp. The system is unnoticeable nor felt. The RNS system is available for people 18 years and older and for those who have tried at least two antiseizure medications but still have frequent seizures. This system monitors the brain and detects the beginning of a seizure and it responds with a brief pulses of stimulation. The stimulation disrupts the signal so a seizure can not occur. You will also be provide with a device that you and your doctor will be able to monitor.

Before the RNS Stimulator was created, treatments for people with epilepsy have had few effective treatments choices, and with the medications came multiple side effects. Scientist have been researching background for seizures for many years and technological advances have been made in order to make the RNS Stimulator.  The RNS system was created by Neuropace and was developed in Silicon Valley.

Overall this system, although costly and surgery is needed, will change one's life. This system is unnoticeable and can not be felt. With the RNS Stimulator you are given your life back. You are able to go back to your everyday lifestyle, without worrying when your next seizure will be.  After just one year, studies have shown that seizures will decrease by about 44%. Also with the new technological advances made with this system, the chances for other diseases may be cured.

I hope with this new and advanced technology, scientist are able to prevent and cure many diseases or disorders that people deal with on a daily basis. 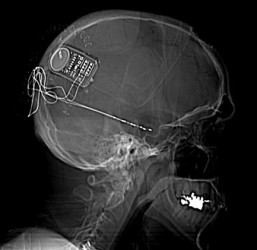