The latest in editorial cartoons are often available through RSS feeds provided by publishers and the artists themselves. Check out Daryl Cagle's blog, The Cagle Post: Cartoons and Commentary offers both images and political analysis. 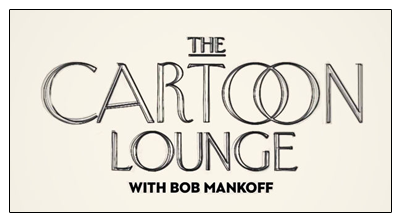 Check out the Daily RSS Feed from the New Yorker, below:

Cartoonist Greg WIlliams creates editorial illustrations of information found on Wikipedia for his blog "WikiWorld." Other projects include editorial cartoons based on twitter, blog posts, 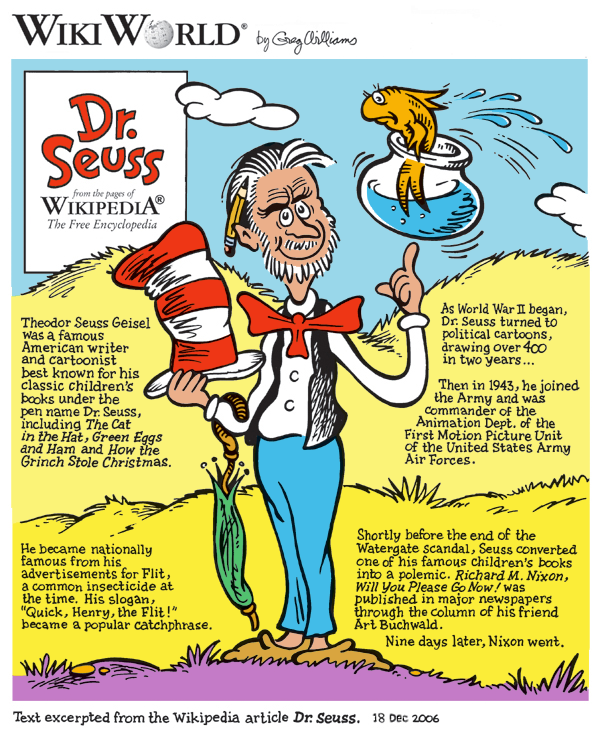 Editorial cartoons are based on the artists interpretation of his audience's social concerns, including economic, politics, and social policy.  The cartoonist uses a number of elements to effectively communicate their interpretations. As you "read" editorial cartoons, watch for the following in order to understand the information the cartoonist is attempting to convey about these social concerns.

Consider what images cartoonists can use to indicate the United States.  Common symbols include the Statute of Liberty, a bald eagle, and Uncle Sam.  Flags are often used to represent countries, as well as prominent political figures. Universal symbols are often used transmit positive ideas. On the other hand, stereotypes are often used to reinforce negative connotations.

Caricature parodies an individual.  By exaggerating features, political figures and other celebrities become immediately recognizable in the cartoon.

Characters are placed within commonly recognized situations and social cliches in order to evoke empathy (or other strong emotions) from viewers.  Ask yourself:

From the U.S. National Archives, you can fill this out this analysis online and print out (or save to PDF).

Check out this illustrated tutorial on analyzing editorial cartoons.
Cartoon Analysis Guide from the Library of Congress

Do Editorial Cartoons Make a DIfference?

The articles below examine the ways in which editorial cartoonists have influenced society.

The Cartoonist Group strives to be the largest searchable database of cartoon art on the internet. Along with other artists, they feature 23 leading editorial cartoonists in their editorial cartoon section.  Educators are welcome to use the images under the "fairuse" guidelines of copyright law.

invites you to "get drawn into the 2016 election."  Their daily cartoons are available online or through twitter. Cartoons are categorized by issues, candidates, and the voter.

AAEC Cartoons for the Classroom

It's No Laughing Matter:  Lesson Plan (Library of Congress)

The Political Cartoon in US History (PBS Learning Media)

EXAGGERATION Sometimes, certain physical characteristics are exaggerated in order, either to help viewers identify characters or to emphasize a character trait.  Look for overdrawn facial features, clothing styles, and actions for clues to how the cartoonist would like readers to view the character.

SYMBOLISM Simple objects are often used to indicate larger concepts or ideals.  For example, the American flag may be used to indicate the country as a whole.  Look at the objects in the cartoon and consider what larger ideas they may represent.

LABELING Some objects and ideas are difficult to represent in a simple way.  Cartoonists will label objects in order to make the representation clear.  Look for labels both attached to and directly on objects.  Consider how the labels clarify the cartoonist’s message.

ANALOGY Analogy is a comparison between two things that, unalike, share some key characteristic.  Cartoonists will often use situational analogies where characters are placed in an atypical setting that has similarities with the real world in which they function.  This allows readers to connect complex events and actions (such as those of a government official) with common situations (such as the common chores of a farmer).  Look for surprising settings that indicate how the cartoonist would like to you consider the actions of the character.

IRONY Irony occurs when there is a difference between the way things are and the way they should be.  Cartoonists include ironic things in their depictions to draw attention or express opinion.  Look for unexpected (ironic) depictions of characters and situations.