Wolves in Wisconsin: Research and Debate

This is a hot topic, and it's debatable.  Remember that in debate, it's not about who shouts the loudest. It's all about EVIDENCE.  If you're making a claim, your claim will be stronger when you back it up with opinion of an expert or affiliated sponsor.

Take notes! Keep track of keywords, ideas and the experts who present them.  You'll need to build your credibility on the expertise of others.

Keep current!  There are ongoing developments in this topic.  Check daily for new information!

Recognize opinion (editorial)!  It is very important to establish the credibility of the author when you use this information.

Click on the image below to visit the Wisconsin Wolf Harvest interactive map. 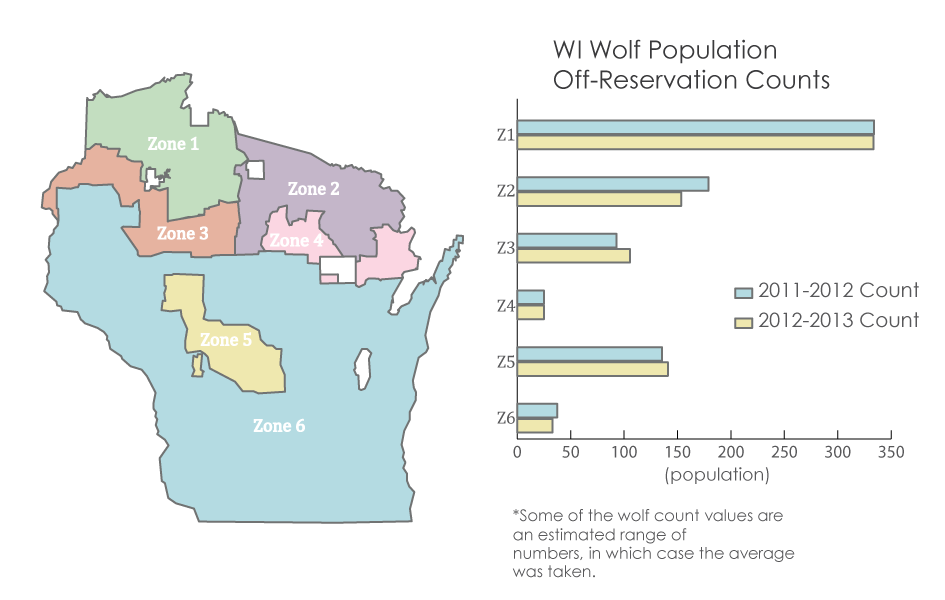 Our Speak Your Mind guide outlines the type of talking points you'll need to win the debate.

Our Paraphrase Indicators guide will help you borrow credibility from the experts.

Media Bias Uncovered and Thinking about Personal Bias in the News Media are two guides that will help you learn to recognize opinion, even when it isn't explicitly marked as editorial.

Before Wolves May Be Hunted, Science, Faith and Politics Clash (New York Times)
This national article focuses in on the many layers of debate occurring within Wisconsin over the reintroduction of wolves.

Federal Protection of Gray Wolves May Be Lifted, Agency Says (New York Times)
Discusses the wolf debate on a national level with hyperlinks to additional information and sources.

Finding a Middle Ground for the Gray Wolf (New York Times)
This slideshow highlights the collaborative efforts of conservationists and rangers in Montana to find solutions to the problem.

For More Wonder, Rewild the World (TED Talk)
George Monbiot "imagines a wilder world in which humans work to restore the complex, lost natural food chains that once surrounded us."

In the Valley of the Wolves (PBS Nature Video)
This documentary follows "a three year story of the fall and rise of the most famous wolves in America."

Gray Wolf in Wisconsin (Wisconsin DNR)
The DNR's site provides links to information about the species, depredations and volunteer monitoring programs in the state.  Be sure to check out the wolf maps and the wolf caution sections for the most recent updates on data.

Guide for Minnesota Farms & Ranchers Living in Wolf Territory (MN Dept. of Agriculture)
This site offers insight into the effects of wolf depredation of livestock and pets.

History of Wolves in Wisconsin
This .pdf factsheet (download it to your Google Drive) provides the history essential to understanding the current status of wolves in Wisconsin, along with helpful graphics.

Hunting Wolves, Saving Wolves (PBS Now)
This video report was created in response to the removal of federal protection of wolves under the Endangered Species Act.

Medicine of the Wolf
This companion site to a film by the same name examines the "powerful relationship we have with the wolf" by wildlife ecologists and Native American leaders.

Norway Has 68 Wolves Left and It Wans to Kill 47 of Them
October 20, 2016 news release from the Natural Resource Defense Council

The One and Only Wolf Species of North America
Published in the New York Times (accessed via SIRS), this July 2016 article considers the conservation of wolf species vs. hybrids.

Reintroducing Wolves into National Parks Could Restore Ecosystems  (Audubon)
This article outlines how wolves help to restore ecosystems in our national parks.

Wolves at the Door (OnWisconsin)
This article highlights interviews with both advocates and opponents of wolf reintroduction.