My name is Pandora Thao. I am currently a senior at Monona Grove High School. My plans after high school is going to a four year university and majoring into nursing or biology. I have always had an interest in cardiology or the study of the heart. The heart is a very fascinating organ that plays an incredibly important role in operating a body. Treatments and surgery on the heart can be very risky for it is what keeps the body operating at all times, so I am always interested in the different ways the heart has been treated from the various types of heart diseases such as balloon angioplasty.

From the Texas Heart Institute, Coronary Artery Disease abbreviated as CAD, the most common type of heart disease, affects over fifteen million Americans. CAD results from a condition called atherosclerosis which is when a waxy substance forms inside the arteries that supplies blood to the heart. As the waxy substance builds up, the arteries narrows which makes blood flow into the heart very difficult. Angina, more commonly known as chest pain, may develop if the blockage from the substance continues to build up and gets worse. This can lead to a heart attack. Medicine can be taken to relieve pain from the angina, but the medicines do not clear up the built up in the arteries, so to reduce the chance of a heart attack there may need for a balloon angioplasty or stent surgery.

What is Balloon Angioplasty?

According to the American Heart Association encyclopedia,

The first procedure was done on a coronary artery in 1977 in Zurich, Switzerland by German-born, Dr. Andreas Gruentzig. He was inspired by American doctor, Dr. Charles Dotter's first angioplasty procedure in a leg artery that was done a decade earlier. He moved to Switzerland to continue is research and work to creating balloons and catheters sturdy and small enough to get inserted into the tiny coronary arteries. 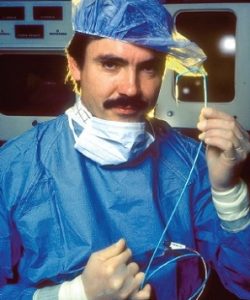 This is an image of Dr. Gruentzig holding the balloon angioplasty catheter.

After the first successful procedures, he continued to improve the technique by performing more procedures to see what needed to change or fix.

Balloon Angioplasty have saved many lives for many years. Before angioplasty, people with blocked arteries would have to have an open surgery, but with angioplasty, it has impacted medicine in many positive ways.

From scai.org, the future of angioplasty will probably be known as "angioplasty plus".

I believe the future of any type of angioplasty will continue to grow and improve. With the types of technologies today's society has advanced, I believe that there will be great changes to make angioplasty something that can save billions more lives for the next fifty plus years.