EpiPen and Other Epinephrine Auto-Injectors

Numbers have been spelled for accessibility

Font has been changed for accessibility

In 1913 (nineteen thirteen), a French physiologist named Charles Richet was making an important discovery. Although it had existed for a long time beforehand, anaphylaxis shock, or the severe allergic response that closes the airways and raises blood pressure, had finally been figured out; however, a solid treatment was not found until the middle of the 20th (twentieth) century. During the sudden rise of anaphylaxis shock, doctors decided to treat the symptoms with epinephrine (adrenaline). It ended up working, and for several decades after emergency vials were bought for those who needed it. During the Vietnam war, the military asked Survival Technologies Inc. for a simple and easy to use injection system for soldiers who were hit with chemical gasses. This resulted in the ComboPen being made. After the war was over, the company patented the system, but for a different use this time, and soon the FDA officially approved the EpiPen. The spring loaded system removes the act of filling up a needle, resulting in a faster save for those who are having an allergic reaction and making it easier for those who must self-inject. The EpiPen was the first of its kind, and is a brand that is difficult to beat. Currently, it has little competition, it's only other competitor being AdrenaClick; however, no matter the system used, it still saves lives. Although the rate of hospitalization of anaphylactic shock has risen from 21,000,000 (twenty-one million) to 25,100,000 (twenty-five one-hundred thousand) the mortality has stagnated between 186 (one-hundred eighty-six) to 225 (two-hundred twenty-five) deaths per year, resulting in a fatality rate of .3% (point three percent). 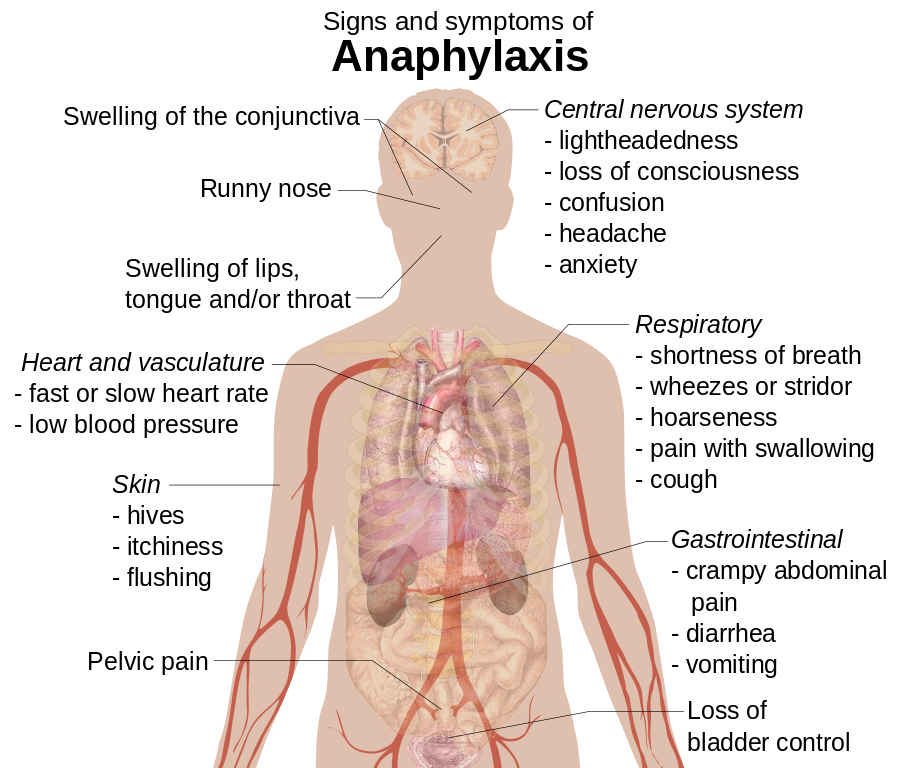 The discovery of epinephrine, or adrenaline, is accredited to Jokichi Takamine, who discovered the drug in the early 1900s (nineteen hundreds). This drug had been proven to be very cheap to make and distribute, making it easy to experiment with. During its early stages, it was used for a myriad of diseases, and it even jump-started medication for heart and lung problems. Right before the sudden rise of anaphylaxis in the 1960s (nineteen sixties), doctors using it to treat the symptoms of anaphylactic shock. With a needle and vial in hand, people were being saved left and right; however, it wasn't until the 1970s (nineteen seventies) when the EpiPen was created. Originally designed by Sheldon Kaplan, who worked for Survival Technologies Inc., the system was first named the ComboPen and was designed for soldiers in the Vietnam War who were hit by chemical gasses, particularly nerve gas. While creating the system, though, Sheldon anticipated its use for epinephrine. Newer models involved newer innovations, including a non-reactive glass cartridge. In 1977 (nineteen seventy-seven) an official patent for the system was made, but it wouldn't be approved by the FDA for medical use until 1987 (nineteen eighty-seven). Since then, Kaplan had been improving his design over the years, resulting in a second patent in 2004 (two-thousand four) for an Automatic Injector. He later died in 2009 (two-thousand nine), but his system still lives on. The original EpiPen has switched from company to company, and in 2007 (two-thousand seven) was officially bought by Mylan.

In 2003 (two-thousand three), another epinephrine auto-injector was invented, called the Twinject. Twinject was created by the company Hollister-Stier and was a system that could deliver two doses in one pen. From 2003 (two-thousand three) to 2008 (two-thousand eight) it hopped from company to company, eventually reciding in the company Shionogi. Two years later they faced a recall of the product due to the inconsistency in delivery. Right after, in 2010 (two-thousand ten), the company launched a product called AdrenaClick, which is much like the Twinject, but only deliveres one dose. This system was sold through Greenstone, and in the beginning had to face Mylan's 91% (ninety-one percent) of the global market for epinephrine auto-injectors. While the EpiPen dominated the market with Mylan's help in lawsuits and programs, AdrenaClick struggled. Shionogi eventually announced that they would stop producing them and sold the rights to a company called Amedra Pharmaceuticals. A year later, Amedra relaunched the product, and soon after allowed Lineage to make a generic version of the AdrenaClick. In 2015 (two-thousand fifteen), the patent once again was sold, and a company called Impax Laboratories acquired both Amedra and Lineage.

There have been many more epinephrine auto-injectors, but unfortunately many have been recalled and removed from the US market. For instance, TEVA's generic EpiPen, which had face large-company lawsuits from the start of its conception in 2009 (two-thousand nine), was finally removed from the shelves in 2015 (two-thousand fifteen) due to a petition from Mylan. The same goes for Auvi-Q, an auto-injector with vocal instructions, which was sued at it's beginning by the manufacturers of the EpiPen, Pfizer King. However, in the European market, epinephrine auto-injectors are abundant and available and are currently selling the following: Adrenalina, BP Auto-Injector, Altellus, Anapen, Emerade, EpiPen, Fastjekt, FastPen, and Jext. Compared to the US market, the auto-injectors are significantly cheaper as well. 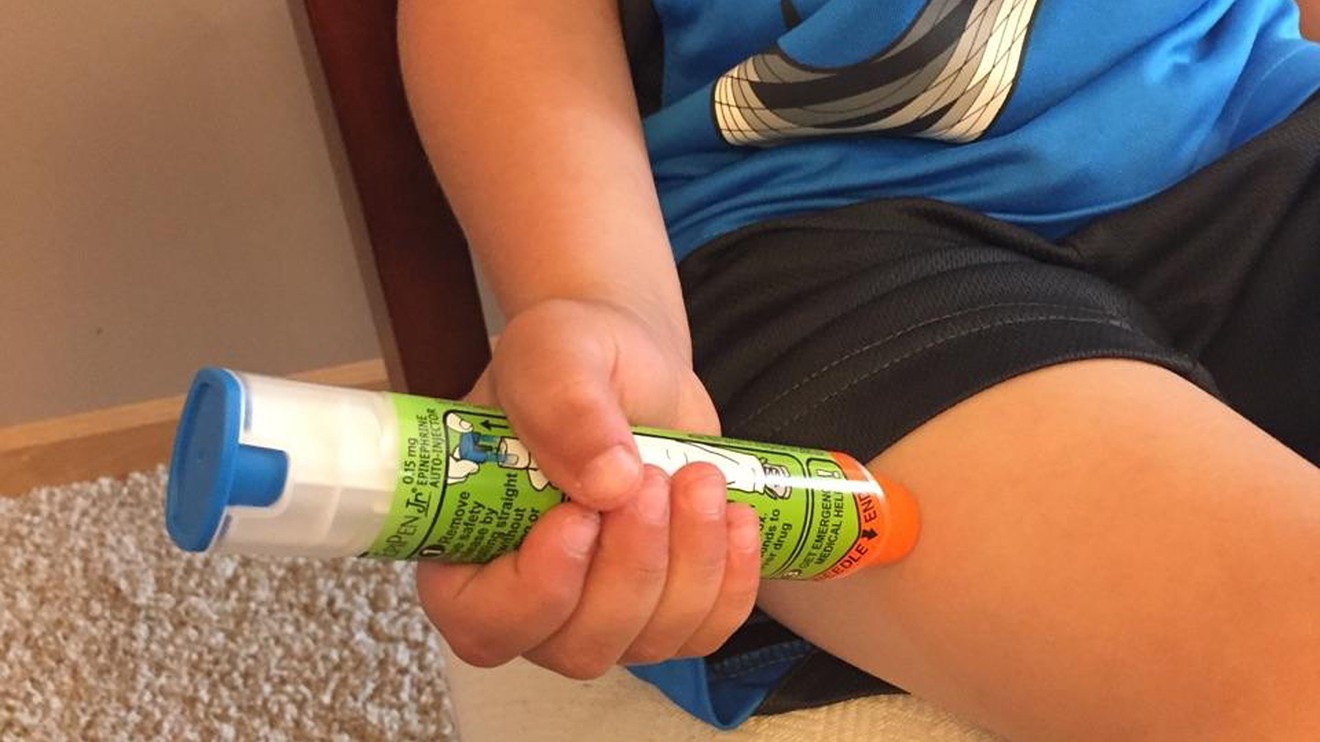 While there are problems in the epinephrine auto-injectors market, this is something that can be fixed.  As people express their outrage over prices, the government continues to seek to help give aid. Currently, TEVA and Kaléo are working on a generic versions of the EpiPen, and as they produce that, more and more companies may try to join in the market. Eventually, though, I hope for there to be another, sure-fire and cheap solution for anaphylaxis that could be more permanent.

Since 2007 (two-thousand seven), the price of a two-pack of EpiPens have been drastically rising, starting from $93.88 (ninety-three dollars and eighty-eight cents) to $608.61 (six-hundred eight dollars and sixty-one cents), resulting in a price raise of more than 500% (five-hundred percent). Since Epinephrine expires annually, the users must pay that amount once a year, resulting in a quick loss of money, which all goes to the company. The CEO of Mylan, Heather Bresch, had a salary raise from $2,453,456 (two-million four-hundred fifty-three thousand four-hundred fifty-six dollars) to $18,931,068 (eighteen-million nine-hundred thirty-one thousand sixty-eight dollars) within that time span. These prices were helped by EpiPen's EpiPen4Schools program, which came under fire in New York for possibly breaking the anti-trust law, a law that regulates competitiveness in the markets. It doesn't stop there, unfortunately. Promoted by the Bresch in 2013 (two-thousand thirteen), the School Access to Emergency Epinephrine Act, was fully supported by Bresch's father, Senator Joe Manchin (D-WV). This, and the fact the EpiPen owns 96% (ninety-six percent) of the US market and 89% of the world market explains the views of many people seeing these actions as crooked. This isn't the only case of rising medical prices, though. Take Martin Shkreli, who bought out a type of popular AIDS medication that already came at a high price of $13.50 (thirteen dollars and fifty cents) and shot up the price to $750 (seven-hundred fifty dollars) overnight, or Novo Nordisk, the makers of the Novolog insulin brand who have changed the market price from $39.95 (thirty-nine dollars and ninety-five cents) in 2001 (two-thousand one) to $299 (two-hundred ninety-nine dollars) in 2017 (two-thousand seventeen). There are good things that come out of high-prices in the medical market, such as congress's intervention involving Mylan, resulting in a co-pay that covers up to half of the cost of an EpiPen, and companies taking the chance to compete, making generic medicine.

In the epinephrine auto-injector's generic medicine market, however, there has been difficulty putting out brands. Many of the competition to the EpiPen have been removed from the US market, such as Twinject and Auvi-Q. Some haven't even made it into the market, such as TEVA's generic auto-injector and Sandoz's auto-injector. All of these have faced up against Mylan and King, either by petition or lawsuits. The FDA has also often been a block against the generics, rejecting them and taking them of shelves, often due to possible malfunctions. This starts breaking into questions; What do we consider safe enough for a system? Is paying for an expensive system to help with a possibly deadly disease worth it, or can it be skipped? Would we rather have cheaper prices for a product with possible faults or a singular product that costs too much?

How to Administer the EpiPen

In this video, I’m going to teach you how to administer an EpiPen if someone is having a severe allergic reaction.

To administer the EpiPen, first get the prescribed EpiPen, then remove the [blue] safety cap and follow the instructions printed on the pen.

Hold the EpiPen with your fist without touching either end, then push the [orange tip] hard against the side of the person’s thigh through clothing or bare skin.

Hold the EpiPen in place for 10 (ten) seconds.

Remove the EpiPen by pulling it straight out. Rub the injection site for about 15 (fifteen) seconds.

Make sure to note the time of the injection and dispose of the EpiPen in a sharps container.

An EpiPen should work within 15 (fifteen) seconds to a few minutes.

Be prepared to give a second dose if the first dose is not sufficient.

Now that you’ve administered your EpiPen you should call for emergency help.

How to Administer AdrenaClick