An electroencephalogram, or EEG is a measuring of brains waves. EEGs can be used to diagnose epilepsy and diagnose sleep disorders, to determine if a comatose patient is brain dead, and watch brain activity for any reason.

Hans Berger, a German neurologist invented the EEG in 1929. He received some opposition because most people thought it was impossible to see the brain thinks. In 1933, two journalists proved his invention when they tracked their own brain waves. In 1947, the American EEG Society was founded. Up until the 1960s, EEGs were inspected visually until digital equipment became available. The digital reading helped researchers assign wave length to different brain waves.

In 1950, Walter White developed EEG topography, which is primarily as a research tool. It helps map the activity across the brain instead of just record it. Then, in the 1980's, BEAM was invented by Frank Duffy. BEAM is a procedure designed to record and measure all electrical activity observed in the brain. Using computerized electroencephalograph, the system analyzes and displays brain activity. It adds detail to EEGs and can help diagnose dyslexia and schizophrenia, both of which are hard to diagnose.

This is a picture of Berger's EEG. Note only two brain waves, beta rhythm (top) and alpha rhyme (bottom).

This is a picture of an EEG printout. You can see the various brain waves- gamma, beta, alpha, theta, delta (not in particular order). 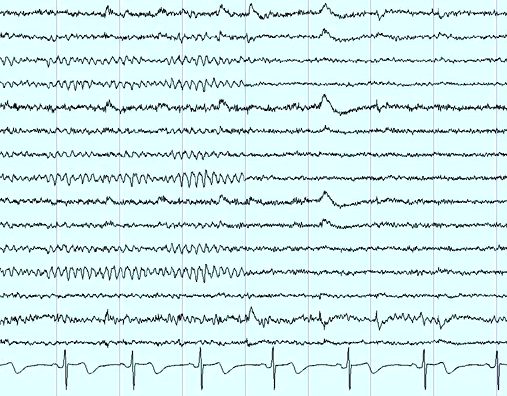 When techology becomes more avaible, more people can use it and benefit from it. With computers becoming smaller and less expensive, EEG machines are also becoming more portal and less expensive. Because of this, EEGs can be used more.  EEG use is making it easier for doctors to diagnose young children with epilepsy, something that wasn't possible before. Imagine a parent's relief when epilepsy was caught before their child siezed so they could then avoid the triggers. .

One very interesting EEG use that is being explored right now is employing biofeedback therapy as a treatment of ADHD and ADD in children and adolescents. A year's worth of counseling and medication relieved some symptoms of ADHD among a group of children, but only children receiving additional biofeedback therapy managed to hold on to these healthy gains after going off the medication, according to a new study. This is an extremely exciting innovation for families who deal with ADHD and ADD. Biofeedback therapy has also been cited as helping with various mental disorders such as anxiety. The research looks promising. By heightening use of some waves and lessening others, moods may be able to be changed.

EEGs are completely safe: the patient is not exposed to radiation, and is not given electric shocks. The electrodes put on the scalp are noninvasive; they are glued on. The electrodes require precious placement, so the prep time is longer than a test such as an MRI or x-ray. Unfortunately, an EEG can't diagnose epilepsy on its own. The EEG will show that a seizure is happening, but not always the specific type of seizure. What kind of epilepsy is diagnosed depends on the type of seizure. Furthermore, an EEG will only show seizure activity in the brain if the patient seizes while hooked up the the machine. Often doctors will try to induce a seizure by depriving the patient of sleep the night before, and utilizing common seizure triggers during the test such as loud noises, strong smells and bright, flashing lights. This can cause discomfort to the patient. If a seizure happens, the patient can be assured proper care will be given to them since they are already in a medical environment.

Because EEGs are done using digital equipment now instead of being printed out on paper, the human error factor is considerably less. Of course with any medical test there is room from error, but a certified technician gives the test then the doctor reads and interprets the results.

EEGs are used to diagnose comatose patients as brain dead. There is controversy, especially in some religious sectors, over what doctors and families should decide for brain dead individuals (whether to keep on life support or let go). Brain dead patients are prime candidates to donate organs, so this use of EEG tests are beneficial to other patients.

An EEG is a relatively inexpensive medical test to run, however how much the patient pays varies heavily on insurance providers. The patient is usually referred to a neurologist, which may require pre-approval by insurance companies.

I feel like EEGs have and can teach us so much about the brain. EEGs have helped both medical doctors, researchers,and psychologists understand the brain better. I am excited about the emerging biofeedback technology because it can help people manage their ADHD and ADD without the use of medications. Biofeedback can also help other mental disorders such as anxiety or schizophrenia. I'm very excited to see how biofeedback can help patients suffering with these disorders, especially if they don't want to take prescription pills.  Currently, EEGs are not able to diagnose epilepsy on its own. My hope for the future is that new technology emerges that will enable this to happen. Patients who suspect epilepsy will only need one test, instead of numerous ones. This will both save time for the hospitals and money for the patients.